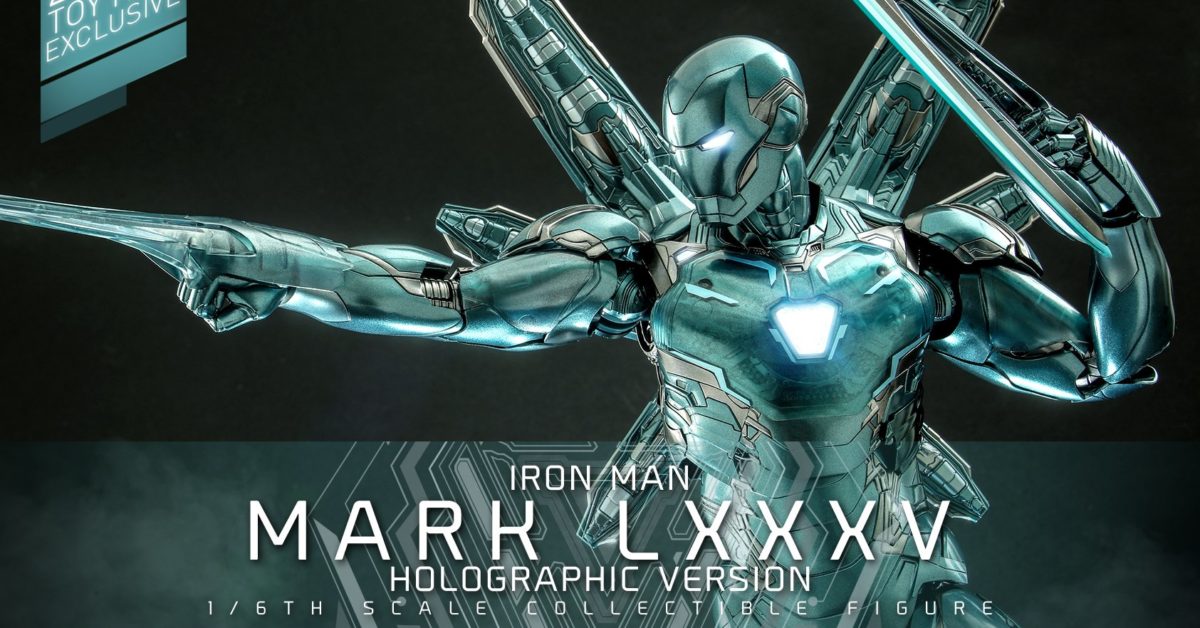 There can’t be a Hot Toys event without at least one new Iron Man figure, and another has just been unveiled. Hot Toy is gearing up for SDCC 2022 with its new set of Toy Fair Exclusive 1/6 scale figures. Three minifigures have been revealed, including a new Iron Man minifigure giving MCU fans the return of the Mark LXXXV armor. Coming from us Avengers: Endgame, Tony Stark’s Final Armor makes a return with die-cast elements and features a new holographic twist. The LXXXV Iron Man armor is reproduced in a beautiful deco with blue accents with a metallic look.

Iron Man will have an LED light-up feature with head, upper body, back, and light-up arc reactor. Elements from the original version of the figure also return in a new color that includes interchangeable hands, Nano Lightning Refocuser, Energy Blade, Nano Repulsor Cannons, and more. The costume color is fantastic and will easily be a sweet piece to add to any Iron Man Hall of Armor collection. The Avengers: Endgame – Iron Man Mark LXXXV holographic version 1/6 scale figure is slated for release in Q4 2022. No pricing has been revealed, but it should be pre-ordered around the same time than SDCC, and fans can find Hot Toys collectibles here.

“Iron Man Mark LXXXV is the most advanced and powerful armor Tony Stark has ever created. It is a special armor that gives Stark high-tech strength, durability, flight and a variety of weapons Inspired by the design of Tony Stark’s very latest Iron Man suit in the MCU, Hot Toys is thrilled to present the holographic version of the Iron Man Mark LXXXV 1/6th scale collectible figure in metallic blue as an exclusive item from this year’s toy fair only available in select markets.

Masterfully crafted based on Iron Man Mark LXXXV in Avengers: Endgame, the die-cast figure giving the armor a holographic twist features a helmet head with LED light-up function, an intricate design of the armor ‘Iron Man recreated in blue with a metallic look, LED light-up features scattered throughout the upper body, back and arc reactor on the chest, highly detailed weapons including Nano Lightning Refocuser, Energy Blade, Katar and a pair of Nano Repulsor cannons, interchangeable hands, and a specially designed figure stand. This version of Iron Man will surely stand out in your Hall of Armors collection!”